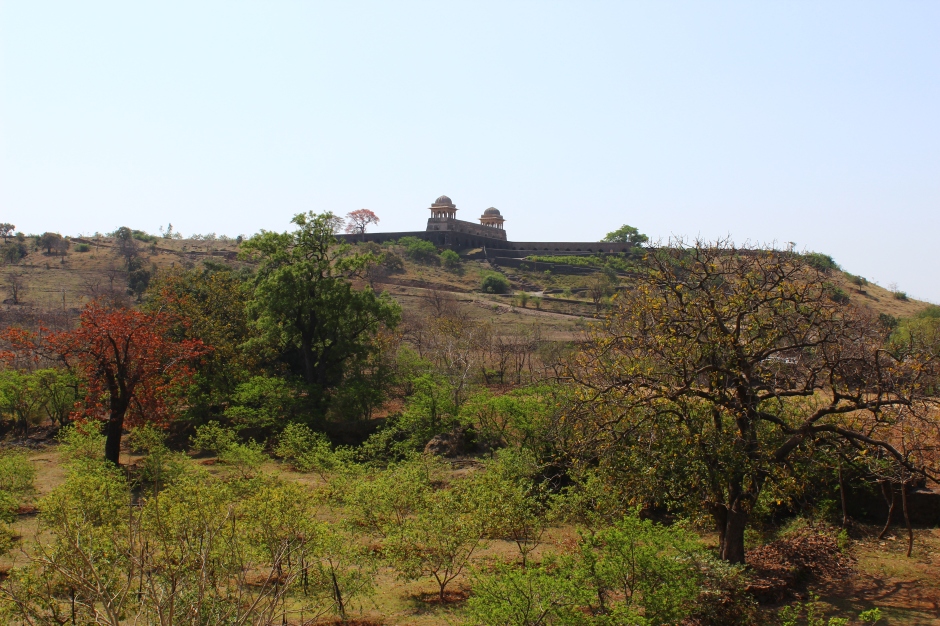 Memories are funny things. You never know what random incidence or coincidence triggers memories buried deep in the past. For the past couple of days I have been thinking of Mandu – a fortress town situated 100kms away from Indore where the Malwa plateau suddenly and abruptly end to give way to the rolling Narmada valley.

It could be what a friend from Indore – who I was telling about our Mandu trip a couple of months ago, said about the beauty of Mandu in the monsoons. And since we had visited Mandu in the blazing summer of 2014, it perhaps planted a desire in my heart, a desire to visit Mandu once more when it is soaking in all it’s wet splendour. The last few days that I had to ponder and observe the beauty of monsoons from the peace of home, perhaps brought that desire alive again. Now I don’t know when this desire will be fulfilled but if you are in or around Indore this monsoon, do take a break to visit Mandu and I can assure you that you will not be disappointed. Read on to find out why.

Spread over 20 sq km and established by Raja Bhoj in the 10th century, Mandu has seen a number of invasions and exchanged many hands over the years – from the Khiljis to the Sultanate of Gujarat to the Mughals and eventually to Baz Bahadur – the last independent ruler of Mandu.

The most enduring of these tales is perhaps that of Baz Bahadur and Rani Roopmati – a beautiful Hindu singer originally from one of the villages on the banks of Narmada. Some accounts call them lovers, others say their relationship was just that of an artist and a connoisseur of art but all do confirm that Roopmati’s Pavilion – perched precariously at the edge of a cliff overlooking the Naramada plains was what took Baz Bahadur to persuade the beautiful singer to move to Mandu. Built originally as an army observation post, it was from here that Roopmati would gaze down the plains for a distant glint of the sacred Narmada river. Unfortunately, their story ended sadly when Akbar’s forces marched on to Mandu and Baz Bahadur escaped Mandu leaving Roopmati behind to consume poison.

Some of the other notable places of interest around Mandu include:

But Mandu has so much more to offer than just these particular protected monuments. All along the road from the point we started our uphill ascent and passed through the massive gate carved into the fortified remains of the town, there were big and small buildings – houses, mausoleums and the sort that now sadly lie abandoned. These really gives one the true picture of Mandu’s past as a prosperous and thriving settlement.

Although in the blazing heat of March, the hills around Mandu were parched yellow and it’s several tanks and lakes were almost dry, the sights and stories of Mandu’s golden past  kept us captivated nevertheless.

Getting there and around:

Mandu is 2 hours by road or 95kms away from Indore. Indore itself is an overnight train or bus journey from Mumbai/ Pune. We hired a cab from Indore and did a day trip to Mandu. However, if you plan to stay in Mandu and explore the place at leisure, there are several options available including the Hotel Malwa Retreat run by MP Tourism.

The last leg of the road from Indore to Mandu involves a winding climb up the plateau surrounded by deep ravines. Thinking back, I can’t help but imagine waterfalls tumbling down the steep green slopes in all of monsoon’s wet glory.

Hiring a guide can be good investment in Mandu as without knowing the story surrounding them, the monuments are nothing but crumbling buildings. Guides can be hired for the entire tour of Mandu for INR 500 – 600 (subject to inflation & negotiation skills). Local transport such as buses and auto rickshaws are available to go from one monument cluster to another.

For more weekend destinations off the beaten track, follow us on:

6 thoughts on “Monsoon and memories of Mandu”

Traveler. Photographer. Storyteller. I believe that travelling is not just about the destination but also the journey, the people, the experiences, the food, the culture and most importantly a good story to tell when you return.