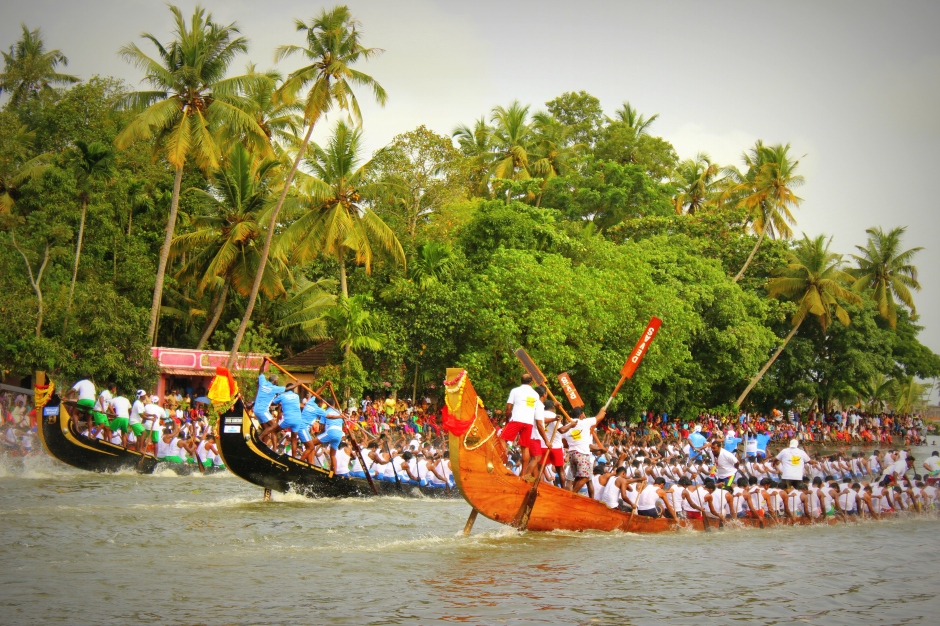 Monsoon is grave matter in Kerala. It rains so heavily that even the mythical King Mahabali remembers to carry an umbrella for his annual visit to his beloved kingdom during the festival of Onam that falls in the middle of the monsoons. No Kidding!

But every second Saturday of August, the town of Alleppey (also known as Alappuzha) – the de facto capital of Kerala’s backwater country is abuzz with tourists, the rain notwithstanding. Thousands of visitors; local as well as foreign; flock to this “Venice of the East” to watch what is arguably the biggest water sport event in India – The Nehru Trophy Boat Race – commonly known as the Snake Boat Race.

The first time I visited Alleppey with a couple of girlfriends almost a decade ago, I was mesmerized by it’s pristine beauty and the laid-back life in the backwaters. Every kid in India reads about the Snake Boat Races of Kerala in their school geography books but it was only on that trip that I came to know that Alleppey is the place where it is held. Since then, I had secretly wished to return to Alleppey to watch this spectacular sport live.

Conducted primarily around the harvest festival of Onam, snake boat races are a centuries old tradition in Kerala. However, the named after the first Prime Minister of India, Pandit Jawaharlal Nehru, the Nehru Trophy Boat Race has turned this tradition into a competitive event. It has been an annual event in Alleppey since 1952 when Nehru donated silver replica of the snake boat that acts as the rolling trophy of the race. In spite of a searching a lot online, we could only ascertain that the race will happen on the second Saturday of August. There was no clue to the exact start time of the race on that particular Saturday. Hence, to be on the safer side, we decided to reach Alleppey a day earlier.

It was a regular Friday evening in the small town of Alleppey. The rains seemed to have taken a break. The locals were going about their usual business along the canals and a handful of tourists were wallowing on the wide porches of their homestays or decks of their houseboats watching the sun go down.

The homestay we were staying in was chosen for one and only one specific purpose – it’s reviews on trip advisor mentioned that it is close to the starting point of the Nehru Trophy Boat Race. And for once the reviews were bang on! Sitting on one of the covered balconies of the homestay overlooking the Punnamda Lake, one could actually see the red and white poles and make shift wooden platforms that marked starting point of the race.

Our host was a merry guy. He seemed to have made an early start on the festivities of the following day and was already on a high. When we asked him what would we the best place to watch the race from, he told us animatedly and a bit boastfully that his porch was the best spot to watch the race from. He went on to say how the calm lagoon spread out in front of us would be jam packed with snake boats (locally known as vallam kali) of every size from day break tomorrow; so much so that it would be impossible to spot even an inch of water. We rolled our eyes but refrained from cross questioning him.

The next morning started off quiet. But as the sun rose high into the sky, the participants and their vehicles began assembling in the lagoon one by one. We were told that the actual race would begin only in the afternoon so we decided to hire one of the leisure boats and take a tour of the backwaters. As we sailed away, we watched more teams in color coordinated t-shirts and shorts, going towards the starting point. Some rowed their own race boats to the destination; others with resources had hired motor boats to tow their race boats to the starting point. The enthusiastic chants and music emanating from them led a festive cheer to the otherwise calm surroundings.

When we returned to our home stay, the lagoon in front of it had changed beyond recognition. Snake boats; big and small; were anchored along the banks. Some teams were huddling together possibly discussing race strategy, some were performing the ritualistic prayer and decorating their boats with garlands while others were wrapping up their lunches before they hit the water. Every now and then the boats would break out into impromptu practice sessions. Spectators in their festive best had gathered in droves along the banks. The narrow road that ran along the main race canal had got so crowded with revelers on foot that vehicular traffic had come to a complete stand still.

It was finally around 3pm that the races finally began. We edged our way through the local crowd to find a place to sit on the muddy banks of the backwater. What was unfolding in front of us what a water equivalent of a motor car race. There were flag girls in small speed boats to kick off the race. Another boat carrying umpires. Yet others were carrying media and advertising hoardings. Some boats carrying tourists vying for a closer look also hovered around.

The race started with the revving of the speedboats carrying the flag girls. Heats, quarterfinals, semifinals and then the finals. The long, narrow canoe like snake boats with arched ends carrying about 128 rowers gathered at the starting point five at a time. (There is also a smaller version of the snake boat that can carry about 64 rowers) There were over 80 teams participating.

Every time the whistle went off, the close to hundred men sitting in two parallel rows on either side of the canoe attacked the water with a ferocious energy, raising their oars and slicing the water in swift synchronized motions. Five men standing on the upturned rear brandished their long oars with the flair of a swordsman and kept the boat on it’s steady course, two men in the center set the rhythm by beating down their heavy wooden mortars as though grinding some invisible spices to dust and yet more egged the rowers on. The boat sprang forward throwing a splash of water into the air.

It was a fantastic display of team work, strength and stamina. But if one thought that only men were capable of pulling this off, there were women’s teams to prove everyone wrong. With the pallus of their traditional white Kerala Kasavu Sarees tucked into their waist, the women’s leg of the race gave a mean competition to those of the men in terms of athleticism and team spirit. I can’t deny that my heart let out a yelp to girl power on seeing them.

As evening fell, the victorious and the not, receded back to their villages taking with them the spoils of the day and the desolate calm of the monsoons returned to Alleppey. We made our way back to Kochi the next day and then onto home but not without a lifetime of memories and a camera full of stunning pictures and videos. It was really a scintillating experience.

Getting there and around:

The closest airport to Alleppey is Kochi (Ernakulam). While some long distance trains have a stop at Alleppey, Kochi is better connected to the other major cities of India. Alleppey is about 60 kms away from Kochi and is well connected by buses. Alternately, one could hire cabs from Kochi to Alleppey. Pre-paid cabs to Alleppey are easily available at Kochi airport.

In Alleppey once can either hire auto rickshaws to get around or take the much more quirkier option of the water shuttles (equivalent of road buses) with pre-defined stops, timings and ticketing system.

Alleppey does not have any dearth of places to stay from grand resorts and five star hotels to quaint homestays to luxurious house boats but if you wish to stay close to the starting point of the race, try Keraleeyam Homestay or Malayalam Lake Resort for a ring side view of the race preparations.

Where to watch the race from:

9 thoughts on “A Thriller in the Backwaters”

Traveler. Photographer. Storyteller. I believe that travelling is not just about the destination but also the journey, the people, the experiences, the food, the culture and most importantly a good story to tell when you return.